Recap by Linda Desjardins – After weeks of unseasonable weather, clouds, rain, cold, wind, and fog, the weather for the Chelsea Chase was just delectable!  It was right around 60 degrees with low humidity, sunshine and the 15mph wind was perfect for cooling runners off as they ran. This race, organized by the Chelsea Police Department, supports the Chelsea Relief Police Association and the Jordan Boys & Girls Club in Chelsea.

The course is a very pleasant one, incorporating roads that were relatively traffic-free (with a little help here and there by the Chelsea Police), and there were smooth spots, rough spots, hills and flat spots.  The variety of terrain and the scenic route gave the race extra appeal. Because there was a lot of involvement on the part of the boys and girls clubs, there were many young volunteers along the route (always nice to see kids participate), and many young runners.  Ah the exuberance of youth: jack-rabbit starts, sudden stops when they get winded, unexpected turns and resumptions of an all-out pace. If the kids are engaged in running and racing…it’s all good.

Next came Tom McMahon, cruising in at 27:20, placing him atop the male 60-69 age group.  Tom doesn’t know he’s supposed to get slower as he ages.

Shortly after Siobhan, Mike Pelletier, our fearless and seemingly ageless president, dashed in at 30:18, a sub-10 minute pace, and he took first in the male 70-79 age group.

Linda Desjardins was a bit farther back, finishing in 31:44, and also earned a first in the female 70-79 group.

And in an incredible comeback from her second knee surgery, Cheryl Welsh ran sub 11’s and finished in 33:09, taking second place in the women’s 60-69 group.

Tom, Rosie and Siobhan left shortly after the finish so we were not able to get a photo of all the Striders… but four of us did our best post-race posing! 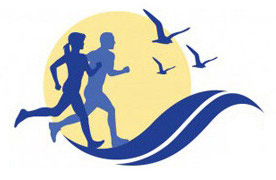